microbeton appeared in the January edition of the journal ‘Industriebouw’ with its project Spaarnelicht, Heemstede. Contractor Slokker Bouwgroep told about the construction and challenges during the project. Read below the contribution of microbeton to this journal.

The large dimensions of the balconies of the Spaarnelicht apartment complex in Heemstede provide the necessary structural challenges. microbeton, in close cooperation with the main contractor Slokker Bouwgroep Huizen and the main structural engineer dioCon, literally and figuratively provided a suitable solution.

This method was chosen because the balconies are up to almost three metres deep in some places. “This would have been very difficult to construct using a traditional building method. The special method is not standard, but it certainly has advantages. “Because we make elements of ferrocement with EPS core, they can be up to 70 per cent lighter than traditional concrete. Furthermore, the balcony does not have to be propped up, the crane deployment can be lighter and it works faster. Finally, it is possible to place the balconies as one of the last elements in the construction. Ultimately, 89 balconies were installed in a short period of time of about one month’. View the complete project here

Home
About Us
How We Work 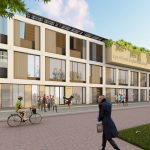 Bajes Kwartier will be transformed into a sustainable and green neighbourhoodUncategorized